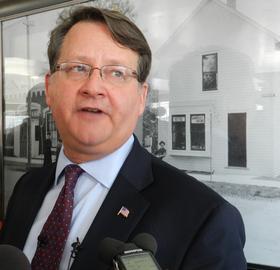 The FBI has now joined the investigation into the contamination of Flint’s drinking water. That’s in addition to the U.S. Prosecutor and State Attorney General Bill Schuette.

The announcement comes in advance of tomorrow’s House committee hearing on the public health disaster.

In the meantime, leaders at local, state and federal levels are trying to piece together money and strategies to get the lead out of the water and to help the children who have been exposed to lead.

Democratic U.S. Sen. Gary Peters is one of those seeking money and solutions to help Flint through this crisis. He announced legislation Monday at Flint’s Hurley Medical Center that would focus on an “absolutely critical component” of dealing with the fallout.

He tells us the bill would essentially expand the U.S. Department of Health and Human Service’s Head Start Program.

“Given the insidious impact of lead on brain development, we know that children in particular have been impacted as a result of the lead exposure in Flint,” Peters says. “That exposure will last a lifetime.”

Flint has around 6,000 children currently eligible for Head Start, Peters tells us, but only 1,000 are actually enrolled. He wants to bring in the money necessary to increase that number. Peters estimates it would take $50 million to get the ball rolling, with further investments throughout the five-year plan.

“This is an investment that pays huge dividends long term. It’s better to deal with these children early, to make sure that they have the services they need, and it will prevent an awful lot of trouble down the road,” he says.

Peters is working on an amendment with Democratic U.S. Sen. Debbie Stabenow that would “address primarily the infrastructure issue.”

“It’s just simply unacceptable that you have to live on bottled water. People need safe, clean drinking water at the tap. We need to have infrastructure improvements. It’s pretty clear that a lot of the pipes that have been damaged, especially the older lead pipes, need to be replaced,” he says.

Peters tells us the amendment would bring in federal resources to supplement Michigan’s efforts in Flint. He says they are still in negotiations, but are initially seeking $600 million; $400 million of that would be a matching fund, he explains, for which the government would match funding put up by the state. The other $200 million appropriation would be disbursed over a 10-year period to “create a center of excellence” in Flint.

Peters is asking Gov. Rick Snyder to pressure his fellow Republicans on Capitol Hill to say yes to the $600 million appropriation.

“I would certainly hope that our local Republicans in Michigan would step up and work to get this passed so we can do it in a bipartisan basis,” Peters says. “My view is that when you’re dealing with folks who have been poisoned by lead and the impact particularly on children, this should not be a Democratic issue, it shouldn’t be a Republican issue. This is just quite simply a human rights issue.”

Sen. Gary Peters tells us more about his proposed legislation in our conversation above.