Reflecting on the life of Ron Scott, Detroit activist 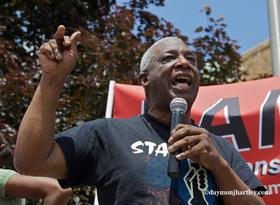 Ron Scott’s lifetime of community activism in Detroit ended recently when he died at age 68.

His quest for peace and justice led him to found the Detroit Coalition Against Police Brutality, but his activism goes all the way back to when he met Grace and James Boggs. He was 16 years old.

His friend and longtime Detroit activist Rich Feldman tells us that everything Scott did, from his early involvement in the Detroit chapter of the Black Panthers to DCAPB, came from a place of love for his home and the people who live there.

Feldman tell us the biggest lesson Scott took from meeting Grace and James Boggs is that “there was a fundamental theory that the only purpose to revolution was the revolution of humankind.”

Listen
Listening...
/
Rich Feldman tells us more about the life and legacy of Ron Scott.