Recently released information about the condition of Enbridge’s Line 5 oil pipelines in the Straits of Mackinac shows some signs of corrosion. But company officials continue to say the twin pipelines running under Lake Michigan are safe.

In 2014, Michigan Radio and the state of Michigan asked Enbridge for more details regarding the safety of the pipeline. The company released some information to the state and to us, but stopped short of providing details about what their diagnostic tools were showing.

The company uses what are called "inline inspection tools" to help them determine the health of the pipelines. (One type is called a magnetic flux corrosion tool, identified as "MFL" below.)

Enbridge released a short summary of its inspection records from 2013. The summary shows corrosion in nine spots along the easternmost pipeline.

Both pipelines are 20 inches in diameter, and have a wall thickness of .812 inches (thicker than onshore parts of the Line 5 pipeline).

… there were nine metal loss corrosion features identified by the MFL tool on the nearly five-mile East Straits pipeline, all of which were located on the on-shore portion of the pipeline. For these nine features, the average maximum depth was 10 percent of the wall thickness, and the average length was 1.7 inches.

Enbridge’s Jason Manshum says the company has been watching those areas. He says they look for changes over time.

“And with those areas, there actually isn’t any areas changing. Meaning it’s ... virtually staying the same as it is now.”

The company says one small area of the pipeline has lost 26% of its metal to corrosion, and that regulations don't call for repairs at that level of loss. More from the report:

Pipeline regulations require immediate action for areas where metal loss is greater than 80 percent of the wall thickness, or a predicted burst pressure is than less than the maximum operating pressure (MOP).

In addition to corrosion, the company says certain parts of the pipelines are not as thick as .812 inches. It says those are places where the pipe thickness varies because the way it was originally manufactured.

Again, Enbridge says these areas of the pipeline are "well within safety thresholds."

I reached out to one pipeline safety expert, Rick Kuprewicz of Accufacts, Inc. He told me that his first impression of summary information is that he didn't see anything alarming.

"All pipelines have corrosion," he said in an e-mail. 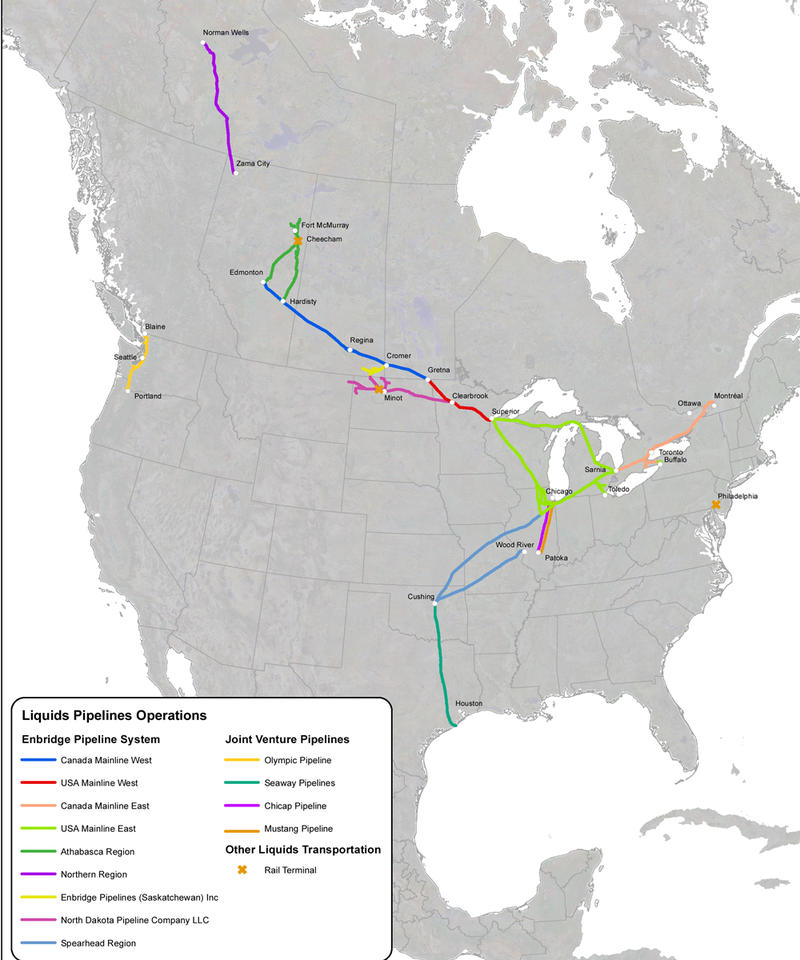 He said the data they released are still incomplete. Kuprewicz says what's really needed is more information on what their field inspections show, along with the data from the inline inspection tools (or ILI tools).

"There can be a wide range in what the ILI tool calls and the actual field measurements, even for highly advanced corrosion ILI tools," wrote Kuprewicz.

He says it's important to know whether the company is keeping a close eye on those areas. Enbridge officials say they are.

What could be a bigger problem, says Kuprewicz, is the condition of Line 5 on the onshore portions of the pipeline.

Listen
Listening...
/
Listen to my interview on Stateside about the latest report from Enbridge.

*Clarification: An earlier version of this story left out the word "less" when describing the percentage of wall thickness compared to the original thickness. It has been corrected above.