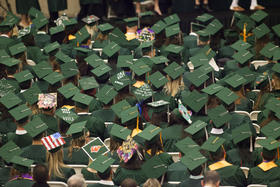 There are a lot of bright, accomplished high school students in Detroit who see college as out of reach. They’re never told about student aid. They’re not aware of courses to help them do well on SAT or ACT tests. They might not be aware of the Detroit Promise, a program to set aside tax dollars to fund two-year college scholarships.

Ashley Johnson is the director of the Detroit College Access Network. She joined Stateside to discuss the efforts and goals of the network.

“Oftentimes, when a student is the first in their family to go to college, they don’t necessarily have those folks in the family and/or maybe in their environment they can go to and ask questions about college.”

“Our focus is really to build the capacity of the schools to create some of these things within the school. We work primarily with principals and counselors and really help them do things like family nights and really give them the resources they need to have those conversations with families. Ultimately, I think in the city of Detroit, oftentimes we begin this conversation in senior year and it’s a little bit too late by then, because by then you already have an established GPA and you likely have already taken the SAT a few times. We need to begin these conversations much earlier and start these conversations as early as middle school before that transition Into high school.

“This is a process that families have to be heavily involved in as well, so it’s not just a student conversation, it’s certainly a family conversation as well.”

“Some of the stuff that schools can do early is, one, making sure they have at least one dedicated person in the building who is dedicated to this effort. We call that person a college access champion. We ask every high school to identify a person as a college access champion. Then we ask them to start small. Can you start by making sure that every single senior completes one college application? Great. Now, can you make sure that every single senior completes the FAFSA? And now can we begin to think about what we need to do with our ninth through 11th graders so whenever you see them and you’re trying to have those hard conversations that you’ve had for the last year or two with your seniors, they’re ready and prepared for that?

“So oftentimes schools start with a simple campaign where they’re working really hard with those seniors, and then they start backwards mapping that, and some go as far as actually having a class dedicated to what students are going to do post high school.”

Who is to blame when students don’t do well at the college level?

“We always want to point fingers at one another and say this system failed or that system failed. I think at the end of the day we’ve got to figure out how to work together. If we know that many of our students are coming [into college] needing remedial courses, there’s something we can do in their 11th and 12th grade year. As we know, the 12th grade year, students aren’t necessarily maxed out with high school credits, but can we use some of that time and energy — they’ve already taken the SAT, they’ve already taken these tests where we’ll know whether or not they’ll need remedial courses — can we use that 12th grade year to take care some of those remedial courses?

“And in that, that would actually have higher ed. and K-12 working together to solve those issues. I think it’s time to move beyond pointing fingers and figuring out, okay, if these are our problems, what are possible solutions that we both can do together?”

CORRECTION: The original post stated that the Detroit College Access Network is currently affiliated with Excellent Schools Detroit. In July, DCAN shifted from being affiliated with Excellent Schools Detroit to the Detroit Regional Chamber. We regret the error.
(Subscribe to the Stateside podcast on iTunes, Google Play, or with this RSS link)
Copyright 2018 Michigan Radio. To see more, visit Michigan Radio.