The possible candidates for interim president of Michigan State University 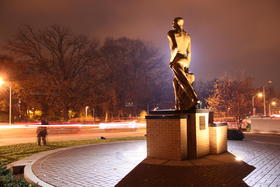 It is the most challenging time in the history of Michigan State University.

As MSU becomes the focus of a cascade of allegations regarding sexual abuse on campus, including accusations against members of the football and basketball teams, the school is also on a high-speed search for an interim president following the resignation of Lou Anna K. Simon.

Chad Livengood, a reporter with Crain’s Detroit Business, has been looking at the possible candidates for interim president. He recently wrote a piece titled “Amid tearful apologies, MSU sets leadership succession plan in motion.”

Universities like to be deliberate when hiring someone for this role. Typically, they hire a firm and “weed through a long list of potential people.”

He said that process can take up to nine months to just contemplate potential candidates. MSU doesn’t have that luxury.

“They’ve got to do this in a matter of weeks, really, because the president left,” he said. “The athletic director retired – but he really resigned, basically. You had the dean of the school that Larry Nassar worked under – he stepped down. There’s pressure … one of the trustees is calling for the general counsel of the university to resign as well.

“I mean, there’s just going to be a leadership upheaval in this university right now. And they’re going to need a steady hand pretty quickly to both, you know, get the day-to-day operations of the university under control and then deal with the fallout and aftermath of all the different investigations…”

Livengood said some possible candidates for interim president of MSU are as follows:

Listen to the full conversation above to hear Livengood explain who these people are, and what they’d bring to MSU.