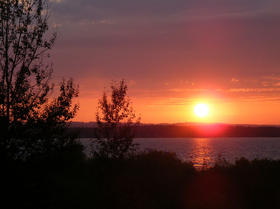 How many times have you said this while you’ve been on vacation?

“I wish we could just live here all the time.”

As it turns out, among the thousands who have visited Traverse City over the last couple decades, many of them have said that. And followed through and made that wish come true. It’s becoming more than the National Cherry Festival and a fun place to spend a long weekend in the summer.

There’s an emerging tech scene and even a foodie culture, led by a famous chef who has brought some attention to the area. In an interview with Stateside for an earlier show, Hour Detroit's Chris Cook said while Traverse City has many long-standing restaurants of note, a recent surge in noteworthy hotspots can be attributed to a variety of factors:

Cook says the celebrities the area attracts have influenced the culture of the region. Michael Moore's film festival has helped to attract more visitors; Madonna's family owns a vineyard in the area; and New York chef Mario Batali, who owns a place in Northport, has become a fan of Michigan food and wine.

This growth has been a nice problem to have for Traverse City Mayor Jim Carruthers. He joined Stateside to talk about how far the city has come and the growing pains it is currently dealing with.

“Regional growth has been happening, but growth in the city limits has been very limited based on our corporate boundaries. We don’t have much room to grow,” said Carruthers, who was elected mayor in November of 2015. “And that’s where a lot of these issues are coming about more recently in Traverse City. Where do we grow? Do we grow up or do we continue to grow out? That’s the challenge that we’re having not just at the local level but on a nationwide level.”

Carruthers agrees there are some Traverse City residents who long for those quieter days before the film festivals and the celebrity neighbors.

“Because we’ve been such a great, up north vacation destination, more and more people have discovered it,” said Carruthers. “And as more and more people discover it, the more and more needs for services, for restaurants, for entertainment come to play. And now we’re seeing the celebrity onslaught of people wanting to come here because it’s a very convenient, easy location to get in and out of.”

According to the mayor, there are many things to like about the city, but there are some economic realities and limitations.

“It’s beautiful, there’s lots of opportunities for recreation and socialization, but it’s still hard to find high-paying jobs. It’s still hard to find affordable housing. Tourist areas tend to be a little more up-scale and the real estate values are a little bit higher, said Carruthers. “We’re suffering from that, in a way, here which isn’t all that bad. I mean a good economy, good real estate values, in capitalism, that’s part of your system. And it’s part of the revenue stream we have in Traverse City, but one of the challenges that we have … is 40% of our land mass is untaxable based on our regional airport, the non-profits, the schools, the churches, the municipal government. So, we have less of a tax base to pay for things.”

There are many decisions to be made when it comes to the growth and expansion of Traverse City. Carruthers wants to see “smart growth” as he tries to find a balance between maintaining the city’s small town charm and the increasing demands that come with a growing population.

“Nothing’s easy, but as I say every day to many people, places like Traverse City, we have all the right problems,” said Carruthers. “I know we can work these things out, but not everybody’s going to agree.”

Listen to the full interview below as Carruthers talks about the challenges of Traverse City’s growth and his vision for the city.