Pity the lowly wood pallet. Nobody thinks about it. But it does so much work. 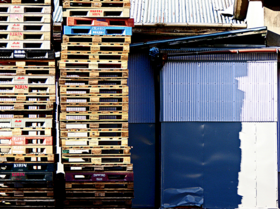 Most merchandise in supermarkets and big box stores is shipped on wood pallets. There are roughly two billion wood pallets circulating in the U.S.

But now, the wood pallet is under attack. What's wrong with them? Well, for starters, tons end up in landfills.

A group called Change the Pallet says there's a better way to ship goods. It’s a group funded by the corrugated pallet industry, which wants shippers to use more of its product.

Adam Pener is with Change the Pallet. Pener says corrugated pallets are lighter and more compact. He says they weigh up to 80% less than wood pallets, and you can fit more goods into a truck by using them.

He says after IKEA switched to corrugated pallets, its truckloads were lighter, and the company used fewer trucks overall. That saved big on fuel and carbon dioxide emissions.

Just imagine if everybody switched, he says.

But it's a little more complicated than that.

John Bradburn is Global Head of Waste Reduction for General Motors. He says GM uses corrugated pallets when it can. But there are cons, too.

“The corrugate will absorb moisture,” he says.

The pallets have to be stored indoors, so they don't get soggy.

Also, Bradburn says corrugated pallets are sometimes not strong enough for heavier stuff - like canned goods or some auto parts.

The National Wooden Pallet & Container Association says wood pallets are recyclable too. They can be shredded for mulch or pet bedding or biofuel.

And after all, both corrugated and wood pallets come from trees. So, can't we all get along?

Change the Pallet doesn't think so. The group is asking states and major universities to tell vendors to use corrugated pallets.

They figure, once a few of them are on board, big corporations will fall like dominoes.