Common carp have been in Michigan since the late 1800s. They’re not considered an invasive species because they’ve been around so long. Many people consider them to be a “trash fish,” but flyfishing for carp is very popular in northern Michigan.

This year, though, guides have cancelled trips and lost thousands of dollars because they can’t find the fish.

Some blame another growing sport: bowfishing.

When carp spawn in Grand Traverse Bay, in some spots, their backs actually protrude from the water like sharks because there are so many packed in shallow waters.

But 15 years ago, no one really fished for carp in Michigan.

Carp are a popular game fish in Europe, so local angler Dave McCool gave it a shot, and noticed how much fun it was.

Carp are smart, and they put up a fight.

“Once I got a trout fisherman, who always turned his nose up at carp, to hook a carp, and then take off and take out 150 yards of line. That started to change the perception,” says McCool.

McCool now leads about 20 fishing trips for carp each year at almost $400 a pop.

But this year, something changed. McCool says they were nearly impossible to find.

“This is probably the most difficult year that I’ve had in the 15 years that I’ve been doing it,” he says.

He had to cancel almost half of his trips.

McCool really can’t say why the carp are gone, but another guide on Grand Traverse Bay, Brian Pitzer, has an idea: bowfishing.

“When I find fish with holes in them, or just dumped with broken arrows, it doesn’t take rocket science to figure out why those fish didn’t ever come back in there,” says Pitzer.

It’s about 10pm and we’re on East Grand Traverse Bay. A lot of bowfishing is done at night, when water is calmer and fish are easier to spot.

When we get to shallow waters, his partner cuts the engine, and turns on the generator to power the LED lights placed around the boat. 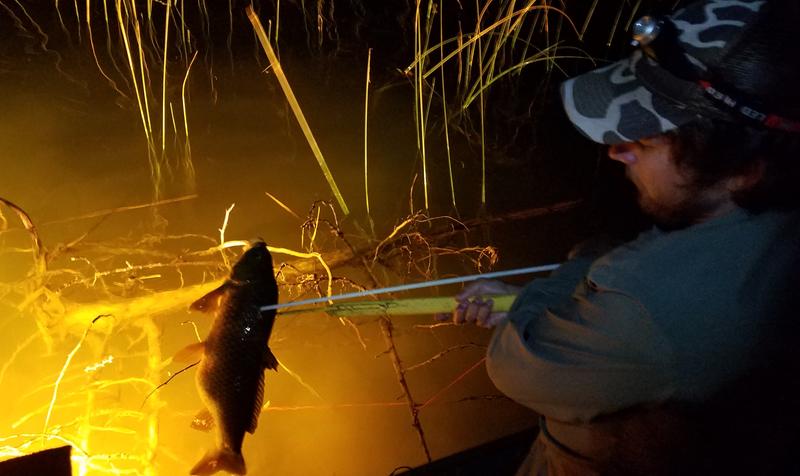 James stands on the platform with his bow at the ready. He points out some smaller fish, then sees a carp.

James reels in the cable attached to his arrow. The carp is about two feet long, with gold-brown scales.

The folks at Thundering Aspens will use that fish for fertilizer on their property.

A couple of weeks ago, they were a lot busier.

“During the spawn,” says James, “our average was about 80 a night.”

James knows bowfishermen have been accused of killing off all the carp. He says he saw plenty of fish this year. But he understands that anglers are out there looking for carp too, so he says he holds back.

“We’ll go out lake trout fishing and we might see schools of carp and we’re like ‘oh that’d be great, but that’s where that guy flyfishes’ so we’re just respectful about it. It doesn’t bother me,” he says.

The Michigan Department of Natural Resources says there’s no direct link between bowfishing and low numbers of carp in Grand Traverse Bay.

Scott Heintzleman is a fisheries biologist for the DNR. He says a lot of environmental factors, like rising water levels, could make the carp go to new areas.

But the DNR wants to see fewer common carp. Heintzleman says they are a nuisance fish that cause problems in the bay.

“Their activities usually stir up the water, they get sediment moving around and smother other fishes’ eggs when they’re in the process of spawning, and then it hurts other native species in that lake. We generally encourage people to take as many as they can,” he says.

And he says the DNR is not reconsidering that rule any time soon.

Anglers say they’re waiting to see if carp come back next year. If not, they say they're going to the DNR to push for a change to the rules on carp and bowfishing.