A new threat to Michigan rattlesnakes 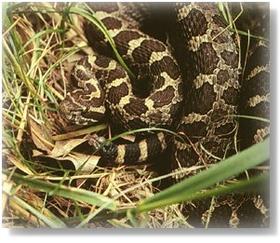 When you think about rattlesnakes, you might picture Arizona. Or Texas. Somewhere out in the desert. But one snake’s rattle doesn’t come from the deserts of the Southwest. It’s from the pine forests of Michigan.

In fact, Michigan is a stronghold for the eastern massasauga rattlesnake.

The snakes face a lot of threats though, including a recently discovered fungal disease.

Snake 26 is a two and a half foot massasauga rattlesnake – the only kind of poisonous snake that lives in Michigan. 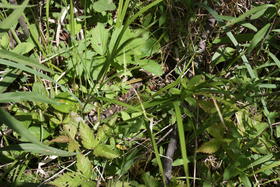 Tetzlaff is holding an antenna. There’s a faint beep coming from a transmitter they implanted into the snake. The louder the beep, the closer the snake is.

“It’s like a game of hide and seek that we play with the snakes all summer,” Tetzlaff says.

Tetzlaff and Ravesi are following 14 snakes this year using their radio telemetry gear.

Snake 26 is a male, and no, he doesn’t have a name. But he is healthy. Like most massasaugas, Snake 26 lives in a small, isolated population of snakes near a marshy area. 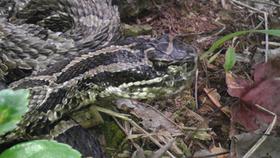 There aren’t many massasaugas around anymore, although most of them do live in Michigan. Habitat loss is the big killer and people kill the snakes too, but they also face a new threat: it’s a fungal disease that’s been found among the snakes in parts of Michigan and Illinois.

Tetzlaff says they first discovered the fungus at Camp Grayling in 2013. Then they learned that it was showing up among massasaugas elsewhere in Michigan.

Snake fungal disease is similar to white-nose syndrome, which has killed many northern long-eared bats. The snakes get scabby growths on their bodies, which can warp their jaws and eventually kill them. 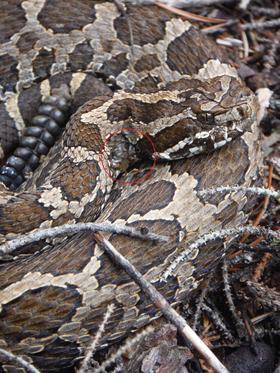 The disease affects other species of snakes too, but Ravesi says it’s especially deadly among massasaugas. He says once a massasauga has contracted the disease, the likelihood of mortality is just about 100 percent.

“In lab settings, almost all of them have died,” Ravesi says.

Right now there’s no known cure for the fungus, but so little is known about the disease that everything is still preliminary.

Is more protection on the way?

According to the U.S. Fish and Wildlife Service, massasaugas have lost at least 30% of their historic population. They’re listed as endangered or threatened in every state they live in, except in Michigan, where they’re a species of special concern. 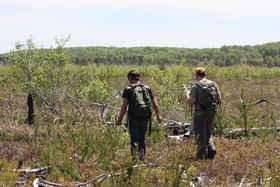 The snake is also a candidate species for listing under the Endangered Species Act. The two researchers say the arrival of snake fungal disease could move it ahead on that list.

And they say that would be good news.

For one thing, there’d be more money for conservation and research. The U.S. Fish and Wildlife Service is expected to make a decision about the massasauga by September.

The small population of Michigan rattlesnakes could be sick, according to new research.

Scientists have found snake fungal disease among eastern Massasauga rattlesnakes at three sites in the state, including one near Grayling.

The decision on a nuclear waste storage site near Lake Huron has been kicked down the road a bit.

Why there are gaps in public health studies on fracking

The Environmental Protection Agency estimates that between 25,000-30,000 new oil and gas wells were drilled and hydraulically fractured annually in the U.S. between 2011 and 2014.

A feature article in the journal Health Affairs says the body of research on the potential health effects of all this fracking is "slim and inconclusive."

The Michigan Court of Appeals has upheld the state’s ban on Russian boar and other breeds of exotic swine.

Michigan banned several strains of boar as invasive species because they breed prolifically, endanger other wildlife, and ruin woods and farmland.

An Upper Peninsula hunting ranch sued, saying the state got it wrong – that the law is impossible to enforce because there’s little to no difference between strains of swine, especially when they escape into the wild.

Honey bees are under attack from a lot of threats.

Researchers say varroa mites are the biggest threat. They suck blood from bees, and can kill entire colonies.

Zachary Huang is an associate professor at Michigan State University. He says these mites use a special skill to attack bee hives. They can change how they smell, so the bees don’t know they’re there. They can actually mimic the smell of a honey bee.