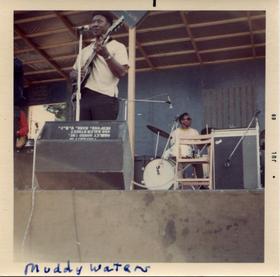 But this year, musicians will breathe new life into that festival, as they work to reignite the energy that pulsed through the crowds so many years ago.

Musician Blair Miller felt that energy back in 1970, when he attended the festival as a 19 year old.

“I remember it was hot and dusty,” he said, “but the energy there was unbelievable.”

He said the experience changed the kind of music he played at the time. He said it helped motivate him to learn a more traditional style of playing.

Miller will return to the festival this year, but this time he’ll join the other blues artists onstage.

Listen above to hear Miller explain what he hopes to the revived festival will accomplish. You'll also hear Partridge explain how the impact of the original Ann Arbor Blues Festival – and its electric or Chicago-style blues – is still felt in today’s music.

This year’s festival will take place this Saturday, Aug. 19 at the Washtenaw Farm Council Fairgrounds. For more information, including the full list of confirmed artists, click here.