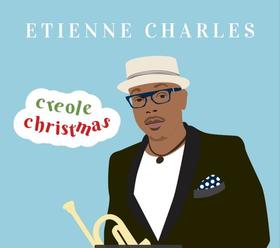 Listen
Listening...
/
Listen to our interview with Etienne Charles.

The album combines, jazz, soul, and Creole music into a holiday mix with both instrumental tracks and vocal tracks that put a soulful spin on some standards, like Go Tell It on the Mountain and This Christmas to some holiday songs from Trinidad that you’ve probably never heard of.

Listen
Listening...
/
Listen to "Go Tell it on the Mountain" by Etienne Charles.

Charles was born and raised on the island of Trinidad, a few miles off of Venezuela. The island is made up of a melting pot of people, from South America, Africa, the Middle East, Europe, India, and China.

Charles says that fusion of culture makes for a lot of different sounds and types of music that can be heard on the island, from waltzes to paseos to calypsos. And that fusion of genres can be heard on his album, Creole Christmas with songs like Roses of Caracas Waltz and a fun twist to the Nutcracker song, Chocolate (Spanish Dance) that includes maracas, congas, trumpet, and a cajón into the instrumentation.

Charles talked about the album, the influence of Trinidad's music on jazz, and his favorite holiday traditions from Trinidad on Stateside.  Audio from the extended interview can be heard below.

Listen
Listening...
/
Listen to our extended interview with Etienne Charles.