It’s a cold day in East Lansing, but many are braving the cold to catch a glimpse of the next major step in a $730 million nuclear physics project. 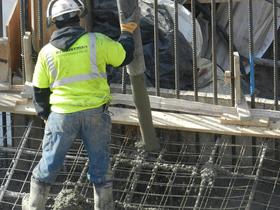 Over the next day or so, truckload after truckload of concrete is being poured into a deep pit on the Michigan State University’s campus.

At the bottom of the 65-foot-deep trench, the concrete will form an 8-foot slab that will support a key portion of the Facility for Rare Isotope Beams.

“That’s where the target needs to sit for the beam to interact with it properly,” says Brad Bull, the FRIB Conventional Facilities Division Director. He’s pointing deep into the pit, where workers are guiding pipes carrying the concrete, from mixing trucks above to the maze of steel bars below. 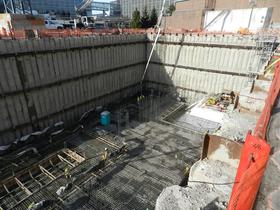 “We want to make it a very rigid structure,” says Bull, “so that we don’t have cracking or defection of any kind.”

It’s been six years since MSU won the competition to design and build the FRIB project. It will be at least that long until the facility is actually built.

Once it is, MSU officials say it will become a major hub for nuclear research, and impact fields as diverse as medicine and astrophysics.

Stefan Tucker made a head-turning discovery when doing research for his senior undergrad thesis in the St. Mary’s River. Instead of finding the sturgeon he was looking for he found wild Atlantic salmon. Previously, the species was believed not to be reproducing in the upper Great Lakes. Tucker explained to us just what this discovery means and what questions it has now raised about the salmon’s presence in the Great Lakes.