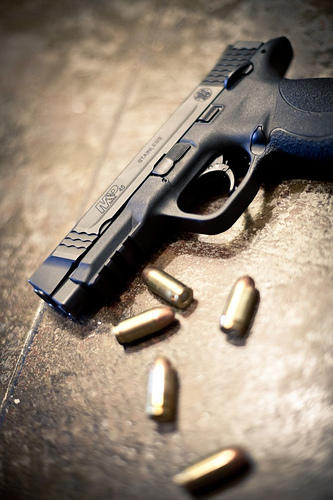 Earlier this month, we spoke with gun instructor Rick Ector about the increase in the number of women in Michigan with concealed pistol licenses, or CPLs.

Kristen Moore of the Michigan Chapter of Moms Demand Action for Gun Sense in America wanted to continue the conversation by exploring the role that firearms play in violence against women.

According to Moore, the presence of a gun in domestic violence situations increase the risk of homicide of women by 500%.

Moore says that while Moms Demand Action respects the choice to keep a gun for self-defense they are striving to make sure it is an informed choice.

"They should know about the potential for self-defense, but also the risks that gun ownership introduces," Moore says, including homicide, suicide, or an accidental shooting.

She says, "American women are 11 times more likely than women in other high-income countries to be shot to death. In terms of firearms, the United States is the most dangerous place for women."

The goal of the group is to prevent domestic abusers and felons from getting guns, and Moore says the way to do this is background checks. While gun ownership is a divisive issue, Moore says the majority of people are in support of these precautions.

However, Moore hopes the state will move past simply the federal standards.

Moore says that while Michigan surpasses the federal requirements for handgun purchases, " ... you can, in Michigan, purchase a long gun from a private seller without a background check."

Earlier this year, Gov. Rick Snyder vetoed a bill that would have allowed people with personal protection orders to obtain a concealed carry permit, and Moore says Moms Demand Action is happy about this, but they are still against the eventual version of the bill that passed.

A newly modified process for gaining a concealed pistol license was approved, and Moore says, "I think lowering the standard for obtaining a CPL is the wrong direction for Michigan."

Many argue that changing the laws will have no effect on criminals’ gun activity, but Moore says, "The statistics bear out that where there are stronger laws, gun crime is reduced," and that's what they're hoping to achieve in Michigan.