Mixtape: West Michigan’s top artists of 2017, plus more to watch in the new year 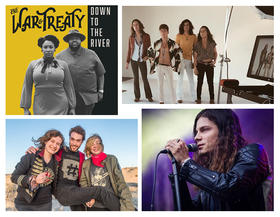 Yes, 2018 has arrived! Time to look back at some highlights from West Michigan’s music scene in 2017 as well as looking forward to some artists generating attention as the new year unfolds.

It wouldn’t be a stretch to say this was a banner year musically for the west side of the state, which already had produced stars like BØRNS, a native of Grand Haven who continues to electrify the pop scene from his new home in Los Angeles.

His sophomore album, “Blue Madonna,” is being released on Jan. 12 and he plays a sold-out homecoming show at 20 Monroe Live in Grand Rapids at the end of January – his first West Michigan concert in several years and a chance for his hometown fans to celebrate his success.

As for West Michigan artists making a national splash in 2017, look no further than indie-folk’s The Accidentals and bluegrass guitarist Billy Strings, both with Traverse City ties (though Billy grew up in Ionia, east of Grand Rapids).

The Accidentals made their major label debut on Sony Masterworks and Billy released his first full-length solo album. Both drew raves from critics; both acts toured non-stop extensively from coast to coast to cultivate new fans. These two acts already had established themselves nationally so it was no surprise they made that leap to the next level. In many ways, it was expected.

But, West Michigan also had a couple of brand new artists who came out of left field - or more specifically, out of the Albion and Marshall area – to open some eyes and ears unexpectedly. Teenage blues-rock sensation Jake Kershaw released his full-length solo debut in late summer and The War & Treaty, a gospel-fired folk and roots music duo, uncorked its first album, “Down to the River” in July, and quickly turned heads locally and nationally with inspirational live performances. Rolling Stone magazine named them one of the “best things” at September’s AmericanaFest.

And, while their home is Frankenmuth, on the east side of the state, you could say that young, hard rock band Greta Van Fleet, which became an overnight sensation internationally in 2017, really cut its teeth in West Michigan, playing lots of shows in Grand Rapids to build its audience.

These Michigan youngsters with a Led Zeppelin vibe were featured in every major music publication last year and sold out every show on their headlining tour, including a concert last Saturday (Dec. 30) at The Intersection in Grand Rapids, a show that sold out in 21 minutes.

Hannah Rose & The GravesTones, “Awake in a Dream” – Singer Hannah Rose Graves has been a mainstay of Grand Rapids’ music scene for the past 5 or 6 years. But she recently put together a new band and recorded a new EP. It was officially released last week when the band played a show at Founders Brewing that drew more than 900 people. She’s grounded in the blues but incorporates soul, funk and rock into her music and she’s got a super-devoted fan base. She definitely intends to perform a lot in the coming year and maybe even venture out on tour, so stay tuned.

hi-ker, “Lippe” – This is another band that’s been around Grand Rapids for a few years and like Hannah, has some roots in the Rockford area north of Grand Rapids. But, hi-ker’s music is electronic pop and with a marvelous airy quality that’s gotten a fair amount of buzz and earned the band a slot at the big Audiotree Music Festival in Kalamazoo this fall.

Cassidy Bisher, “Skin” – Cassidy Bisher is a new face on Grand Rapids’ music scene. He recently released his debut EP, “Skin,” a five-song recording that got my attention from the get-go. You could describe it as anthemic indie-rock with an atmospheric pop vibe, sometimes even approaching prog-rock in its arrangements. He considers himself a “studio junkie” who doesn’t play out a lot but I’m guessing after this release there might be a push to get him on stage more often.