Plants usually don’t get as much love as cute animals. Sometimes it’s hard to get people fired up about an endangered plant.

But Jane Kramer’s trying to do that anyway.

She’s a fine art photographer. She takes photos of the shadows of rare or threatened plants, and then prints them on paper she makes out of invasive plants like garlic mustard and purple loosestrife.

We met up at Kent Lake in southeast Michigan.

“We’re going to put in our kayaks just off this little park, go around the bend, and there are a few patches of American lotus which is what we’re going to photograph the shadow of,” she says, as we take the kayaks down off her car.

We paddle up to a patch of American lotus, its huge yellow petals sticking up out of the water. My job is to hold a white foam board behind the flower, and keep it very, very still. 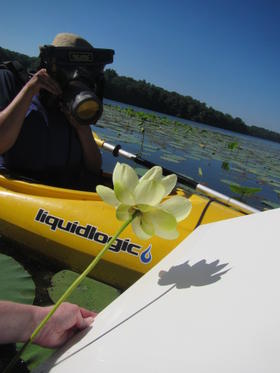 “We’re going to try to get close to it so I can shoot from one side and then capture the shadow on the whiteboard while you hold it behind it,” says Kramer.

Jane Kramer’s drawn to things that are fragile or easily overlooked, and have an element of secrecy.

“The location of some of these plants is kept secret because of poachers, because they're afraid of people coming in and either taking the plants or taking the seeds,” she says.

After she takes photos of the shadows of rare plants, she tackles the flip side of the project: the invasives that threaten them.

When I show up at her house, she’s cooking chopped garlic mustard on a stove in her garage. Then we go to Kramer’s laundry room, where she rinses the cooked plants and puts them in the blender. (She says she's broken a couple parts of her blender trying to chop up phragmites).

“Kind of like making a really disgusting smoothie!” she laughs. 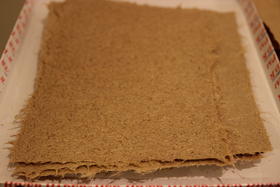 Then she uses a wood frame to make the pulp into paper. Most of it turns out light brown. Sometimes it’s green. Japanese knotweed is a very dark red.

“Now we come to the most stressful part of the whole project,” she says. A lot of things can go wrong in this final phase: transferring the image onto the paper.

Kramer prints the shadow images on special transfer films. She has a magic ingredient to get the shadow photos onto the invasive plant paper: hand sanitizer. The alcohol releases the ink from the transfer paper.

She squirts hand sanitizer onto the paper and spreads it across the page, and then lays the transfer film down on top of it.

“You carefully lift up… you’ll see that not all the ink came off, but I really like how that looks,” she says. 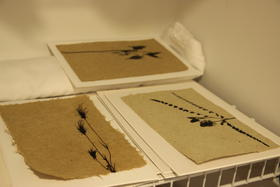 It’s a delicate looking shadow of a flower: the prairie coreopsis.

She’ll be showing her work at ArtPrize this year for the first time. You can also see her exhibits at the Sleeping Bear Gallery until September 9th and the Matthaei Botanical Gardens from September 17th to November 13th.