Last week, state officials confirmed they found chronic wasting disease in a wild deer for the first time. Michigan now joins 22 states and two Canadian provinces where the disease has been found.

Chronic wasting disease was found in a captive deer in Kent County in 2008. This spring, a homeowner in Ingham County reported a sickly-looking deer wandering in their front yard, and that deer is the first free-ranging deer to test positive for CWD in Michigan.

Now, the DNR wants to find out how many more wild deer could be sick, and whether this is an isolated incident or the beginning of a bigger outbreak.

A deadly disease with no cure

“It creates microscopic holes in the brain resulting in severe neurologic disease and ultimately the death of the animal," says Dr. Steve Schmitt. He’s the veterinarian-in-charge with the Michigan Department of Natural Resources.

We’re looking through a window into a high security area called a Biosafety Level 3 lab at MSU's Diagnostic Center for Population and Animal Health.

“That’s where we do wear respirators. All air that comes in has to go out through HEPA filters. There’s where we do bovine tuberculosis, we do our chronic wasting disease work in there, and we can actually handle anthrax in there,” he says.

Schmitt says they’re bringing in road-killed deer to this lab to test them.

“It's been shown that road-killed animals are more likely to have CWD, and the reason for that: if you have these microscopic holes in your brain, this severe neurologic disease, you’re more likely to step out in front of a car,” says Schmitt.

The discovery of chronic wasting disease in this free-ranging deer kick-started the state’s CWD plan. It means state officials will kill deer in a two-mile radius around where the wild deer tested positive. They’ll then test them.

Here's more on the CWD plan from the MDNR:

The plan was developed in 2002 through cooperation between the DNR and MDARD, and was updated in 2012. Actions the DNR will take include: 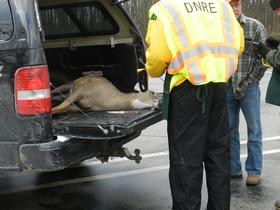 Officials say if a deer tests positive for CWD, you shouldn’t eat it.

“To date, there’s no true evidence that CWD has crossed into humans and is therefore a human pathogen, but there’s always the possibility that disease could transmit into humans. The risk is very, very low but it certainly is not zero. So, most health organizations have recommended that if you’re hunting in an area where CWD is known to exist, that you have that deer tested for disease, and if it comes back positive, that you not consume it,” says Richards.

Chronic wasting disease is a tough disease to manage. That’s partly because deer can be infected for several years before they show any symptoms.

State officials say they’ve tested thousands of deer since 1998 and haven’t detected an outbreak yet.

One of the ways the disease can spread is when deer gather. So the state’s CWD plan includes a ban on baiting and feeding of deer in Clinton, Shiawassee, and Ingham counties.

“We’re certainly hearing some resistance to the baiting and feeding bans in those three counties,” says Amy Trotter, the deputy director of the Michigan United Conservation Clubs.

“Baiting and feeding is a way this disease can be transmitted, and frankly, it’s one of the only vectors we can control.”

What to watch for

If you see a strange-looking deer, DNR officials want you to let them know by calling 517-336-5030, or by submitting an online report. Deer with chronic wasting disease get very thin and can start drooling. They also become tame and less afraid of people.

A serious health threat to state’s wild deer population has been detected in mid-Michigan.