A serious health threat to state’s wild deer population has been detected in mid-Michigan.

Chronic wasting disease first was identified in 1967 as a clinical disease in captive mule deer at the Colorado Division of Wildlife Foothills Wildlife Research Facility in Fort Collins, Colorado. Since then, most CWD cases have occurred in western states, but in the past 15 years it has spread to some Midwestern and eastern states.

In all, CWD has been detected in 23 states and two Canadian provinces.

There was a case in Michigan in 2008.  A white-tailed deer from a privately owned facility in Kent County tested positive for CWD.

This is the first case involving a free-ranging white tail deer.

State wildlife officials admit they don’t know where the deer in Meridian Township may have contracted the disease. Genetic testing suggests the deer is from the local area.

And it may not be alone.

“Nobody can say there aren’t others out there,” says Steve Schmitt, veterinarian-in-charge at the DNR Wildlife Disease Lab. “I would expect that this is not the only CWD-positive deer.”

If CWD is not contained, it could have a serious effect on Michigan’s deer, elk, and moose populations. 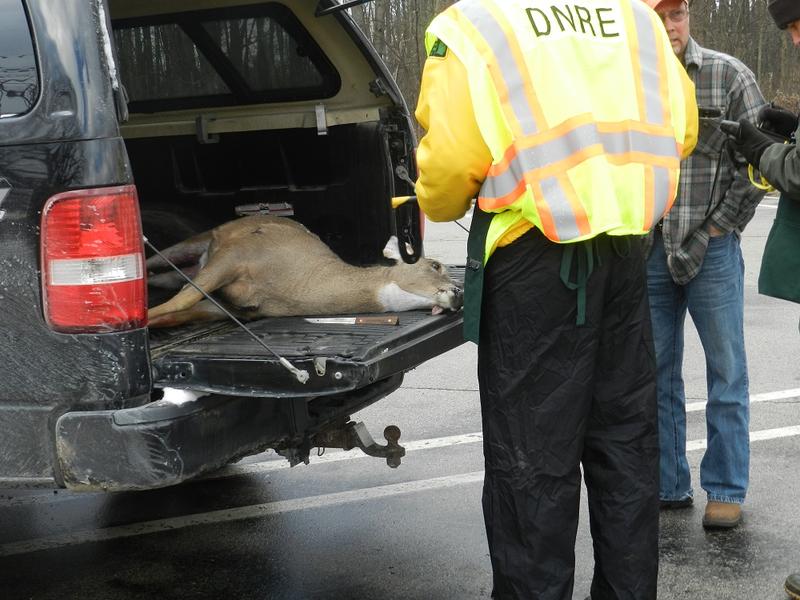 “Our hope and thought at this time is we only have one confirmed deer … is that this will not be going statewide,” says James Averill, the state veterinarian.

State wildlife officials are launching several efforts to contain the potential spread of CWD. During the next three years, the Department of Natural Resources will encourage hunters to kill more deer in parts of Ingham, Clinton, and Shiawassee Counties. The DNR is also stepping up its testing of deer from the affected areas.

“Today’s announcement … is nothing short of tragic and today is a day many of us hoped would never come, though it is not wholly unexpected,” said Dan Eichinger, executive director of Michigan United Conservation Clubs.

The major hunting lobbying group is urging Michigan hunters to work with state wildlife officials to control and hopefully eradicate CWD in Michigan.

Anyone observing unusually thin or deer behaving strangely to call the DNR Wildlife Disease Lab at 517-336-5030. There is also a way to file a report with the DNR online.

The deer herd in Michigan’s Upper Peninsula is so depleted the state is even talking about closing the firearm season this year. It’s just one option listed in a report to the Natural Resources Commission about possible responses to the situation.

Wildlife biologists estimate the population of deer in the UP is at its lowest level in 30 years. Extremely cold winters, particularly in 2014, are to blame, according to the report.

Communities grapple with how to control deer

A recent community meeting in Ann Arbor illustrates a challenge urban areas throughout Michigan are facing: deer. Specifically, deer that are a road hazard or destroy parks and gardens.

A biologist from the city of Rochester Hills described his city's non-lethal program, relying on better road signage and much more community education.

The U.S. Fish and Wildlife Service has put the northern long-eared bat on the “threatened” species list. The agency stopped short of saying the species is in danger of being wiped out by white-nose bat syndrome. The fungus has already killed millions of bats across the country.

Dan Kennedy is an endangered species expert with the Michigan Department of Natural Resources. He says the decision gives state wildlife officials more time to plan while the bats hibernate.