In Megan Abbott’s new thriller, can a deep friendship survive an even deeper secret? 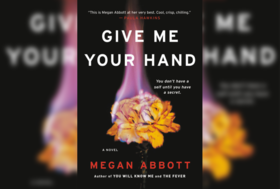 Megan Abbott has been writing crime fiction for more than a decade. With two major TV adaptations in the works, many in the industry are calling Abbott Hollywood’s next big novelist. Abbott grew up in the Detroit area before graduating from the University of Michigan and heading to New York University for her Ph.D in English and American Literature.

Her new novel, Give Me Your Hand, centers on two young scientists and their high school friendship poisoned by a deadly secret.

Listen above to hear Keith Taylor review Give Me Your Hand.

People who are insistent on dividing books into categories have labeled Megan Abbott’s eight earlier novels as “crime fiction” or maybe even as “thrillers.” Abbott’s books have done quite well, so I’m sure she doesn’t mind how the books are pigeon-holed. This new one, however, Give Me Your Hand, might be a little harder to stick in one single place.

There is a crime in the book. A murder, or maybe three of them. Maybe even four. And those crimes reverberate across time, shaping the lives of Abbott’s two protagonists. The crimes drive the plot, and this book has an exquisite plot. Abbott has always been good at bringing the reader into her stories, but now she might be on her way to become a master of that craft – think Michigan’s own Elmore Leonard or even one of Abbott’s heroes, Raymond Chandler.  Megan Abbott might be getting close to that heady company!

In Give Me Your Hand, we are also drawn deep into the psychology of these women, into dark places that are way beyond any easy explanations. Frightening places!

Abbott finds her stories in different types of women. In Dare Me, a novel from a few years back, she wrote about the fraught world of teen-aged cheerleaders. In Give Me Your Hand, she has entered another hornet’s nest, this one the world of research biologists, where very smart people compete for grants and post-docs and laboratory positions in the places that are doing cutting edge science. It’s a world where women have been excluded for far too long, and breaking that barrier adds another tension in the lives of Diane Fleming and Kit Owens, the two brilliant young scientists who are the protagonists of the novel.

Kit and Diane have known each other since high school. They competed for the best grades, and they competed for the best scholarships to college. But their relationship has been poisoned by a deadly secret that Diane shares. Kit feels she can’t tell anyone else, but she can’t really live with the knowledge of the secret either. A new research project brings them back together, and then things start to get frightening.

I don’t want to give anything more away, but I can guarantee that you will be drawn into these lives, the crimes that rise out of them, and the understanding that comes in the end when most of the secrets are revealed.