The spotted wing drosophila is a nasty invasive fruit fly that's turning into a nightmare for Michigan berry growers. 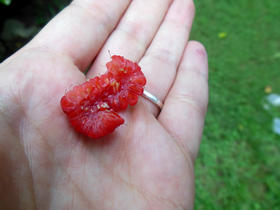 Blueberries and cherries are major cash crops in the state.

Kevin Robson is a horticulture specialist with the Michigan Farm Bureau. He says the fly showed up in Michigan five years ago.

Since then, it’s spread across the state, hitting the berry-growing regions especially hard.

“It’s going to be an all-hands-on deck approach, and that’s what’s going to be needed to get this under control,” Robson says, “I mean, you have growers that have said that next year they might not even grow raspberries because it’s such a problem, and that would be huge for the state.”

Michigan State University's participating in a couple of grant-funded projects to control SWD for organic and conventional farmers.

But the fruit fly is also frustrating home gardeners, like me.

Two weeks ago, I realized my garden was under attack.

The worst part about this whole bug situation is that I can take a perfect-looking ripe raspberry — and I mean perfect — break it open, and there are these little maggots munching away.

Who would eat this? I’m not going to eat this. I don’t want this added protein.

My husband Adam steps in. He tells me I’m overreacting a bit.

“You're very upset about this,” he says, “You’re monomaniacal about it. You are like Ahab with your white whale of flies.”

But I have more bad news for him.

Peach trees. Maggots like more than just berries. They got into the peaches too.

Adam stomps over to inspect our two peach trees. To my horror, he starts ripping the fruit off.

"There’s no good ones,” he says, “They smell like they could’ve been good peaches. It’s really sad."

But the flies in my garden are opportunistic. They’re all over my tomatoes, which have over-ripened and cracked open.

My peaches already had a couple holes in them so they were able to get at those too.

How do these invasive flies find their way into fruit?

Desperate to save my typically huge and delicious fall raspberry crop, I turn to expert Rufus Isaacs, a professor of entomology at Michigan State University. He works with Michigan’s berry crops as an extension specialist. MSU has a bunch of great information on their webpage here. 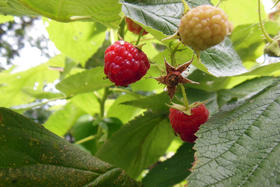 Isaacs says I’m lucky spotted wing drosophila only hit me this year. They first showed up in west Michigan in 2010.

“So the big difference between this new species that’s an invasive pest that came in from Asia, and all the species that we have that are here in Michigan already, is that this one has this egg-laying device that can cut into fruit while it’s starting to ripen,” Isaacs says.

The little eggs hatch as the berries ripen. So when I break open even unripe raspberries, the tiny maggots, or larvae, have already been making a meal of the berry.

“If you don’t do anything and you wait until mid-September — where we are now — it’s very hard to catch up,” Isaacs says.

So is there anything we can do about the maggots?

Isaacs says the best thing home gardeners can do is to pick their fruit as often as possible — every day, ideally.

A couple other tricks include soaking the berries in salt water to draw out the larvae and popping them in the fridge or the freezer to stop the eggs from developing.

He says that while eating the larvae and eggs might be gross, it won’t harm you.

“You know, it’s personal preference whether you want to do that,” he says.

In my garden, picking fruit every day has helped.

I don’t have the heart to throw away these beauties, so I try not to think too much about the spotted wing drosophila I’m sure I’m eating with them.

And by the way, you don’t need to be worried about this if you’re buying berries at the store. Commercial growers have to meet a zero tolerance policy for bug infestations in Michigan.