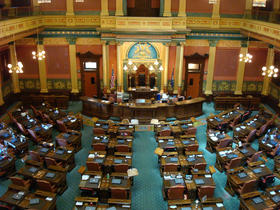 It’s hard to argue against the fact that informed citizens are the cornerstone of democracy.

That’s the idea behind the Open Meetings Act: keeping the business of public entities open, transparent, and accessible to the public.

But 15 years ago, Michigan’s Supreme Court ruled that because the Constitution says “formal” meetings of university boards must be made public, it was alright for university boards to hold closed-door meetings to talk about presidential searches.

Since then, it’s pretty much been up to public universities to decide which meetings are “formal” and which aren’t.

State Rep. Martin Howrylak, R-Troy, introduced a resolution in the House in April that would remove some of the wiggle room in that interpretation.

Howrylak tells us the main goal of House Joint Resolution O is to strip the word “formal” from the Open Meetings Act.

“So that makes it very clear,” Howrylak says. “You have a meeting, it’s public.”

Howrylak tells us he’s had members of such boards reach out to him in support of the change.

“They think this is good public policy, because they don’t want people to question what they’re doing,” he says.