Looking at the results of Michigan's wolf hunt 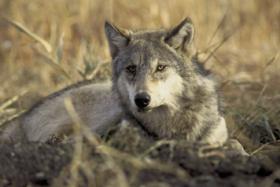 Now that the first-ever wolf hunt is wrapped up, what were the results?

John Barnes explored the impact of the hunt in a recent piece for MLive, which breaks down the ages of the 22 wolves killed over the course of the hunt. He joined us on Stateside today (you can listen to the audio above).

The Michigan Department of Natural Resources had hoped that as many as 43 wolves would be killed in the three areas designated for the hunt.

The MDNR reported that the hunting period had little effect on the wolf population.

Now that the hunt is over, most hunters report feeling disappointed by the outcome. Barnes reports the inaugural hunt's low success rate frustrated most licensed hunters. Fewer than half – 45% – rated the experience as good or very good, responses to a post-hunt mail survey by the DNR showed.

No plans have been finalized for another hunt this year.

A Michigan Tech biologist says wolves should be brought to Isle Royale National Park in Lake Superior if officials want to save island vegetation.

John Vucetich heads a study of the predator-prey relationship in the park between wolves and moose. He says more wolves would help keep the moose population under control. He says, if left unchecked, moose will over-browse and decimate the island’s vegetation.

Vucetich says this is the point where scientists must ask themselves what the purpose of a protected area is.

Campaign To Stop Wolf Hunt To Turn In Petitions

The campaign to stop wolf hunts in Michigan says it has more than enough petition signatures to get a referendum on the November ballot. This would be the second ballot challenge to a wolf hunt because the state’s first wolf hunting law was blocked by a petition challenge that will also go before voters in November.

The Legislature got around that by passing a new law that’s the target of this ballot drive.