There are more than 180 species in the Great Lakes that are not supposed to be here. 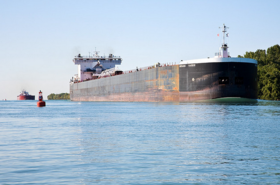 Euan Reavie is a researcher with the University of Minnesota-Duluth.

“Duluth-Superior harbor is the most invaded freshwater port in the world,” Reavie says. “This is kind of the end of the water road for a lot of ships that come in here.”

We're on the western shore of Lake Superior, where he works with the Great Ships Initiative. It’s a program that’s trying to stop invasive species from hitchhiking in the ballast water of ships.

“Ships are moving around, loading cargo, unloading cargo,” he says. “Whenever they take on a load, they start to get lower in the water and so they have to discharge that ballast water — ballast water that generally would have come from somewhere else in the world, another port in the Great Lakes or possibly overseas. That is how the zebra mussel got here.”

The Environmental Protection Agency says that’s the main way invasive species have gotten into the Great Lakes: through ballast water.

Reavie and his team are trying to outsmart those pests. They test treatment methods that companies design. The goal is to kill the creatures in ballast water that could lead to a new invasion.

The testing facility is built on an old industrial port in Superior, Wisconsin. Here, Reavie takes us up a catwalk.

You can see massive white tanks that hold 55,000 gallons of water, and yellow, red and blue pipes snaking below us. 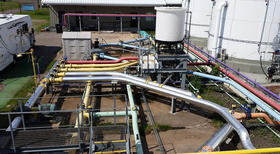 “All the testing we do at this facility is based on water that’s being pulled from the harbor,” he says. “Everything we do here is to simulate as close as possible the activities on a ship.”

In recent years, the main way we’ve been trying to keep invaders out is through something nicknamed "swish and spit." Ocean-going ships, or salties, have to exchange their ballast water at sea. That’s to kill any freshwater creatures in the tanks.

According to the National Oceanic and Atmospheric Administration, there hasn’t been a new confirmed invasive species in the Great Lakes since 2006. Swish and spit often gets a lot of credit for that.

But the shipping industry also has to meet federal rules that require some kind of on-board treatment system.

At the Great Ships Initiative, they’ve tested all kinds of treatment options – ultraviolet light, filters, chemicals like chlorine, and some things Reavie can’t talk about.

“Over here, this is the barn,” he says. “I can’t take you through the barn, because that’s where the trade secrets are held. Sometimes we aren't even allowed to know what the treatment method is; we are supposed to be completely independent, separated from the process and as scientists just assess the before and after effects.”

He says they run tests to make sure these potential treatments won't have unintended negative effects.

"We certainly can't be releasing toxic materials on discharge. Some of these compounds that are used for treatment at high concentrations are toxic. Most of the ones we've tested tend to degrade naturally, and we test to make sure there's no residual toxicity on discharge."

Reavie says some technologies are promising. Others have been total failures.

He says there aren’t a lot of treatment systems on board ships yet.

“There isn’t an all-around treatment system that we know can go on all of the ships or is going to adequately perform everywhere in the world as it should,” he says.

So there are some technical obstacles to getting these systems to work.

“I think if there was more money that was better coordinated we could move faster on it,” he says.

The shipping industry likes it.

Jim Weakley is the president of the Lake Carriers’ Association.

“We think the bill does a lot of things; corrects frustrations from the patchwork quilt that has been the result of the two federal agencies and the eight Great Lakes states all independently regulating ballast water,” he says.

Critics of the bill say it strips the EPA of its authority to regulate ballast water and would weaken protection against invaders.

Molly Flanagan is the vice president of policy for the Alliance for the Great Lakes. She says the EPA would only have a consulting role with the Coast Guard.

She says the Coast Guard knows ships and the EPA knows water quality, so she argues both agencies should be involved.

Reporting for this story was made possible in part by a fellowship with the Institute for Journalism & Natural Resources.