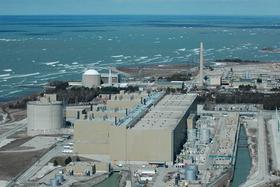 U.S. Rep. Dan Kildee, D-Flint,  is urging people in Michigan to weigh in during a 90-day public comment period on Canada's plan to build a radioactive waste storage facility near Lake Huron.

"We simply request that you stop this project and locate another facility that is not 6/10 of a mile from the greatest fresh water source on the planet," says Kildee.

Canadian officials say they have done an extensive analysis of the risks, and there is no possibility that the waste could contaminate the Great Lakes.

To submit their comments, Michigan residents must write to the Canadian Environmental Assessment Agency by September 1, 2015. Comments can be submitted by mail or email.

Bills have also been introduced in Congress asking the State Department and the International Joint Commission to intervene.

Ontario Power Generation wants to bury some of its nuclear waste on the site in Kincardine, Ontario. All of the company’s low and intermediate level waste would be buried there forever, far underground.