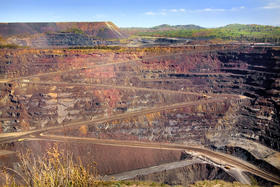 The Marquette area recently received some painful news when Lourenco Goncalves, the CEO of Cliffs Natural Resources announced that the Empire Mine would be closing by the end of the year. More than 400 workers from the region are affected by the announcement that iron ore production, that has been a big part of the area’s economy for a long time, will end.

Amy Clickner, the CEO of the Lake Superior Community Partnership who is working to help the workers with the transition, joined Stateside to talk about how much of an impact this will have on the area that includes Marquette and Ishpeming.

While the Empire Mine will close and will be a significant blow, it isn’t the only mining operation in the area. The nearby Tilden Mine is still on “solid footing,” according to Clickner.

“It’s interesting because 400 jobs in Detroit or Chicago or Grand Rapids may not have the Richter scale effect as it does in our community here,” said Clickner. “Our county is 70,000 people. And these are … family-sustaining wages. These are high-paying jobs with great benefits. They’re tough to replace in a rural community.”

Clickner said finding 400 new jobs that can support a family is not going to be easy, and if they are unable to find a way to do that, losing population for small cities and towns can have a major economic impact.

“We want to do everything we can to retain these families because we don’t want to lose the children in the school district and the purchasing power they have and all of those things,” said Clickner.

To combat that problem, a transition team has been created and federal programs are being put to use to help retrain workers for other jobs and to help them financially.

There is additional hope for some workers, according to Clickner, as there are some growing construction projects that many could transition into. There are also other mining projects in the Upper Peninsula that are in the works. Those mines that are still under development could require a relocation or a lengthy commute, but Clickner said workers in the U.P. are used to lengthy commutes for work.

Listen to the full interview below to hear more on why the decision was made to close the mine and what the Lake Superior Community Partnership is doing to help the workers in the area with the transition.

Listen
Listening...
/
Listen to our interview with Amy Clickner, the CEO of the Lake Superior Community Partnership