How NASA is responding to increased probability of Armageddon asteroids 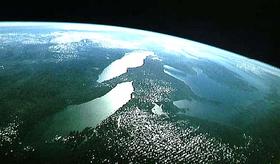 One afternoon while waiting for my flight to board, a headline caught my eye: “Civilization-Destroying Comets Are More Common Than We Thought.” I assumed it was one of those flashy clickbait attention-grabbers like the ones about how researchers have discovered how you can lose ten pounds just by drinking dandelion tea. Much to my surprise, it wasn’t one of those smarmy websites you’ve never heard of. It was Popular Mechanics. Yes, that do-it-yourself periodical for the pocket-protector jet set that has all the panache of your dad’s brown shoes. So why the hyperbole?

Well, last February a video of an asteroid that flew over the University of Wisconsin made its way around the internet. At first, I thought it was just viral marketing gimmick for another end-of-days flick. Apparently not. Scientists have known that we have been in harm’s way for some time. Now, computer simulation models suggest that our chance of being collateral damage in some catastrophic collision with asteroids is seven times greater than previously reported.

OK, so now what? Stop saving for retirement? Forget the whole climate change thing? No worries, NASA is on it. The Double Asteroid Redirection Test, or DART for short, is the space agency’s way back to relevance with the general public. Okay, the moon landing thing was spectacular 50 years ago. But it will take more than the stuff we see now, like psychedelic photos of nebulas in deep space, to justify NASA’s $20 billion budget. That requires something big, like, say, saving humanity.

From an innovation standpoint, this meteor-deflecting technology is right out of science fiction. NASA plans to test it in 2022 on a pair of asteroids called Didymos A and Didymos B. A pool-table-sized craft will careen into space, locate the asteroids using an on-board autonomous targeting system, and crash into the smaller one at a speed nine times faster than a bullet. This interstellar demolition derby will be monitored via a complex array of computer networks and telescopes, with artificial intelligence doing the play by play. Observing the outcome of the kinetic impact will help NASA understand how this strategy could work on Earth, threatening asteroids in the future.

Our friendly neighborhood geniuses at NASA assure us that there is no chance that this little experiment could accidently create a hazard for those of us down here on the Blue Planet. Still, I’m a little troubled by some of the descriptions of DART as a weapon. You need only imagine what such a spacecraft could do given a military application. Satellites, space stations, and all types of lunar modules currently in development could be possible targets. Coincidentally, conservative columnist George Will recently published a provocative piece in the Washington Post suggesting that the U.S. Air Force needs to refocus its efforts beyond our exosphere. Of course, the mission of NASA is scientific and humanitarian, but I can’t help but wonder if DART is being carefully watched as a possible way of advancing American superiority in space.

This all leads to my underlying suspicion about the whole matter. Is DART just a proof of concept experiment, like any innovation prototype, or is our space agency trying to tell us something? If so, I’d really like to know what it is so I can stop worrying about counting calories and whether my next flight will actually depart on time.

Jeff DeGraff is a clinical professor of business administration at the University of Michigan Ross School of Business.

The Next Idea is Michigan Radio’s project devoted to new innovations and ideas that will change our state.

(Subscribe to The Next Idea podcast on iTunes, or with this RSS link.)

Tags:
the next idea
NASA
University of Michigan
Stateside
ShareTweetEmail