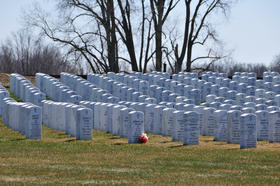 It's impossible to know just how many homeless veterans are on America's streets.

The federal government estimates that there are nearly 50,000 vets who are homeless on any given night.

The National Coalition on Homeless Veterans tells us they've served in every conflict from World War II right up to Iraq and Afghanistan, although nearly half of homeless veterans served in Vietnam.

The reasons they are homeless are many: lack of affordable housing, inability to make a livable income, post-traumatic stress disorder and substance abuse.

Underlying all of that, most have no family or social support networks.

With that in mind, a Detroit high school wants to make sure that homeless vets are not alone for their final journey.

Students from the University of Detroit Jesuit High School have begun serving as pallbearers for homeless military veterans who would otherwise be alone.

Tom Lennon, a senior at U of D High and one of the students who has volunteered as pallbearers joined us today.