Harvey Santana: Some things are more important than party lines 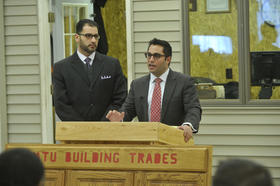 State Rep. Harvey Santana, D-Detroit, is a long-time proponent of bipartisan action in the House.

Once kicked out of the Democratic Caucus as punishment for locking horns with caucus leaders once too often and for occasionally crossing party lines and voting with Republicans, Santana is now serving his third and final term in the state House as vice chairman of the House Appropriations Committee.

Santana says he wasn’t always so willing to play nice.

“I came in as the quintessential bomb-throwing Democrat from Detroit, you know, let’s fight the Republicans tooth and nail,” he tells us. “And then what you realize is that you’re not going to get anywhere doing that.”

Santana stresses the importance of a straightforward approach and the ability to demonstrate flexibility and diplomacy.

In an attempt to sway Republican leadership, he invited then Speaker James Bolger, R-Marshall, and Speaker Pro Tempore John Walsh, R-Livonia, to his home in Detroit, saying, “Look guys, you keep making policy for the city of Detroit, but I don’t think you really understand what’s going on here.  Let me show you what I wake up to every day.”

He planned to take them them around town and into a number of buildings to show them what conditions are really like in much of the city.

When they showed up at his house, Santana says, “The first stop was across the street to an abandoned house where the scrap metal had all been torn out, there were hypodermic needles everywhere, there were crack pipes everywhere. And then you look in the backyard, the grass is taller than me, and I’m five foot ten.”

Santana told them, “Guys, you know, work with me. That’s all I’m asking you to do.”

That was a Monday. Three days later, House Bill 4593 moved out of the house with over 100 votes after being stalled for three years.

“I’m really proud of that,” Santana says. “That’s bipartisanship. That’s what we’re supposed to be doing.”

While he believes that as time goes on more politicians are leaning toward bipartisan thinking, Santana says that the biggest institutional hurdle they face is term limits.

“The structure of term limits that we have here is just absolutely horrible,” Santana says. “This is one big family, as dysfunctional as we can be at times, and I think term limits has really ruined our ability to get to know each other as human beings.”