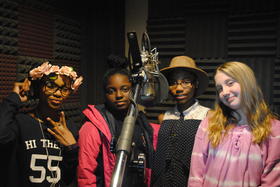 It's been a relentless news cycle this week, so here's a break for at least a few minutes from politics, national security and healthcare. We turned the mic over to some students way outside the beltway. Middle school poets from the Creative Youth Center in Grand Rapids teamed up with teen musicians from Triumph Music Academy to produce a spoken-word album.

They spoke with Michigan Radio about the collaboration. An excerpt is below, but this is just one of those stories you'll want to hear, not just read:

My name is Alanna, I go to Public Museum School, I am in the sixth grade and I love writing poems.

What was the first piece you wrote here?

First piece was...oh that’s so long ago, that was like four years ago...so...I’ll have to say: Roses are Red, Violets are Blue, I love like you like a kid in a candy store.

What was it like to hear someone else playing music to your words?

It was cool because I really liked the beat they made to "I Am." She had a little ukulele and it was really nice and it was peaceful.

And here's an excerpt from Alanna's poem, "I Am"

Not a fighter I am

Wake up I are dinner

I am willy nilly who

Hates lilies I am

The first and don’t forget

I am tiny but who

Cares I am the one

Who ate the jelly bean

I am my mother’s daughter //

Alanna's poem, along with others from the Creative  Youth Center writing workshop, will be published in an upcoming anthology called Book of Explosions: Collecting Shadows & Light.

Her poem is one of two dozen included in a new spoken-word and music album, a collaboration between CYC and Triumph Music Academy. The album release party is Monday, May 22 at 7 p.m. at Brewery Vivant in Grand Rapids.

Tyehimba Jess is an African American poet from Detroit. He recently won the 2017 Pulitzer Prize for his collection of poetry called, Olio. The poems are inspired by blackface minstrel shows.