Expert: EPA could be what Ann Arbor needs to protect drinking water, clean up dioxane plume

Ann Arbor Township and the city of Ann Arbor are both pushing for a federal cleanup of the dioxane plume that has been working its way through the city’s groundwater for several years. The concern is that the 1,4 dioxane, a known carcinogen, could eventually reach Ann Arbor’s main water source in the years to come.

Since the company responsible for the cleanup, Pall Life Sciences, have done little to slow the spread, city officials think the Environmental Protection Agency needs to step in to take care of the cleanup.

David Carpenter, director of the Institute for Health and the Environment for the University at Albany in New York, joined Stateside to talk about the cleanup options for the city of Ann Arbor.

Pall purchased Gelman Sciences, the medical supply company that contaminated the area, after it disposed of the solvent 1,4 dioxane by spraying it on nearby fields and using a deep water injection well from the 1960s through the 1980s. The chemical has already contaminated some private wells on the west side of the city, and some experts believe it’s only a matter of time before it reaches the Huron River, the city’s main source of drinking water.

According to Carpenter, in the mid-1980s, the federal government designated certain environmental sites around the country that needed to be cleaned up because they posed a significant threat to human health. A federal cleanup would bring with it the resources and expertise of the EPA, as well as the possibility of federal funding.

These locations are called Superfund sites, and the township and the city are hoping to earn that designation in an effort to get it cleaned up before it reaches the Huron River.

“If there really is a threat to human health, then federal dollars and federal muscle can be brought to bear to demand the cleanup,” said Carpenter. “Either paid for by the people that have been responsible for the contamination or, in the case of when that facility couldn’t be identified, then from this fund that it collected from industry specifically for that purpose.” 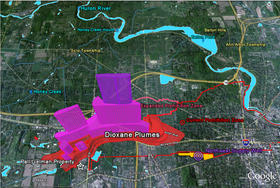 Some local and state officials don't like the idea of a Superfund site designation. Carpenter understands that concern, but says you can’t just ignore health hazards.

Listen to the full interview below to hear more about the process of becoming a Superfund site and if Carpenter thinks it is the right move for the city of Ann Arbor.

Listen
Listening...
/
Listen to our interview with David Carpenter from the University at Albany in New York.
Copyright 2016 Michigan Radio. To see more, visit Michigan Radio.

For the last 30 years, a plume of a colorless, odorless toxic chemical has been steadily creeping toward one of the main water supplies in the city of Ann Arbor.