When I moved from Tennessee to Michigan, winter hit me like a ton of bricks, or maybe it was a full body ice cream headache.

Listen
Listening...
/
An essay for Stateside.

Remember how winters used to be really, really cold? One day you’d wake up and there was no doubt – fall was gone. Winter had arrived. Suddenly the wind rushed straight from the arctic and smacked you in the face. Snow piled up around you, and your eyes stung from the cold. 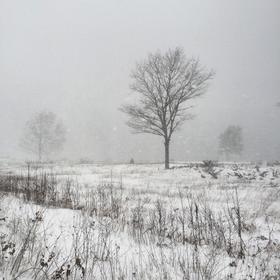 Now it’s kind of like an endless autumn until spring rolls around again.

It’s a bit damp. There’s a touch of frost. Sometimes there’s a brief spell of cold and snow and then it turns downright balmy.

The last couple years I’ve missed that clear delineation between fall and winter. But it dawned on me last week that I was missing some of the more subtle signs of winter’s arrival.

Like oh right, it gets dark at 5:30 not 9:30. And my pets now have this crazy thick coat of fur, but there aren’t any leaves left on the trees.

You know it is winter when you get in your sleek touring sedan and it feels like you’re driving a monster truck thanks to the ginormous snow tires that you still put on every year despite the pathetic excuse for snowfall.

Another sign in my life that winter’s here is that my flight to DC now leaves the gate at 7:10 in the morning instead of 7:24 in order to make time for deicing and still land by 9. Thanks Delta, I really could have used that extra 14 minutes of sleep, but that’s okay.

But it’s that nearly weekly jaunt to the east coast that’s made me appreciate even the toned-down season we still call winter.

For one, we denizens of the Mitten State are a hardy lot. I noticed that as I walked to dinner with a friend in Washington DC last week. She was wearing a winter coat and I was wearing a sleeveless dress. I returned home the next day to even colder weather here. My neighbors were outside in shorts. You know what I’m talking about.

Then there was that morning last year. I woke up before 5 a.m. to go to the airport. We’d gotten an unexpected dump of lake effect snow. I pulled on my boots, brushed the six inches off my car, and drove down the snow-covered highways on the aforementioned humongous snow tires. My flight boarded. We got deiced and landed by 9 a.m. in DC.

I mentioned the snow to my coworkers. They stared at me in disbelief. How’d you get here? Didn’t the airport shut down? I laughed. “Six inches is nothing. You leave a few minutes early. Whatever.”

But later on, I remembered my very first Michigan snowfall. I woke up and looked out my dorm window to see the campus had turned all white. There must have been at least four inches. Four inches! I was elated. Classes would be cancelled! I could go sledding I could play in the Arb – until the kids in my hall looked at me like I was from Mars. “We don’t get snow days. Plus, it is only four inches. This is nothing.” I had to quickly study up on winter, Michigan style.

So while we still have ways of telling the subtle difference between fall and winter these past few years, our real winters were something unique to our northern climate. I know we all complained about the cold and the snow. I know we spent all winter longing for those long summer days. But I secretly hope our harsh winters will return. It’s just that it’s part of who we are, or who we become if we take enough turns around the illusive Michigan sun. So I say, bring on the cold temperatures and let’s crank up that Lake Michigan snow machine.

Tamar Charney is the managing editor of NPR One and the former program director here at Michigan Radio.