State officials want to hear what you think about fracking. 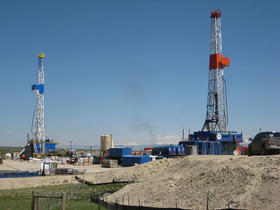 The Michigan Department of Environmental Quality wants to update the state’s rules on hydraulic fracturing. The DEQ is holding two public hearings this week on the proposed changes.

Hal Fitch is the chief of the DEQ’s Office of Oil, Gas and Minerals.

“Starting about 2008, we started hearing increased public concerns. So we met with the environmental community, we met with the public in over 200 different forums and heard those concerns and formulated these rules based on what we were hearing,” he says.

He says the changes focus on high-volume fracking operations. We’ve been using a vertical method of fracking in Michigan since the 1950s. The newer, horizontal method uses much more water – some operations in Michigan have used 20 million gallons.

“The major intent of the rules is to improve transparency, and increase the comfort level of Michigan citizens with our regulations. They cover water withdrawals, monitoring and reporting, chemical disclosure and baseline sampling,” says Fitch.

Fitch says we’ve had about 40 high-volume, horizontal fracking operations in Michigan to date.

Even though environmental groups met with the DEQ to work on the changes, the reviews are mixed.

Lisa Wozniak is the executive director of the Michigan League of Conservation Voters.

“You know, after months and months of conversations, some of the suggestions found their way in, but I will tell you that the new rules fall terribly short from what we hoped would be in them," she says. “Fracking uses millions of gallons of Michigan’s fresh water that can never be returned to our lakes, rivers, and streams. And the current protections and the new rules do not adequately measure the cumulative impact of what one well will have on Michigan’s natural resources much less the many, many wells that are proposed.”

The DEQ is holding two public hearings on the proposed changes to fracking regulations: