Could a vote of no confidence be the end for President Lou Anna Simon? 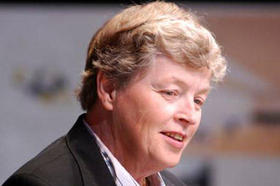 Michigan State University faculty are now talking about a vote of no confidence in President Lou Anna Simon.

David Jesse, a reporter with the Detroit Free Press, wrote an article yesterday headlined, “Most Michigan State trustees quiet during calls for Simon’s resignation; faculty weighs in.” (Trustee Dianne Byrum joined Mitch Lyons in calling for Simon's resignation after this segment was recorded.)

Jesse joined Stateside today to explain what the process for a vote of no confidence looks like.

“It’s kind of a complex one...” he said, “but basically there are a couple different academic governance committees that run the academic affairs of the university when it comes to faculty.”

One of them, he said, is the University Council. They met on Tuesday afternoon and asked for a faculty vote on no confidence.

Jesse said the council determined it would send out a ballot to each of Michigan State’s around 2,200 faculty members, asking if they want a vote on this.

“If enough people say yes, then it will go to the Faculty Senate, which is a smaller body made up of elected representatives from each of the various colleges that make up Michigan State,” Jesse said. “Those folks then would vote whether or not the faculty still have confidence in Lou Anna Simon to continue as president of the university.”

Jesse said a vote could take place as soon as next week.

As far as how much weight a vote of no confidence would have on MSU’s board of trustees or president, Jesse said “these are generally symbolic votes.”

“So they carry ... no real consequences,” he said.

Still, he said pressure would mount on MSU board members if a large percentage of the faculty feel trust in the president has eroded.

In the meantime, Jesse reports the MSU Board of Trustees is working on a succession plan in case the president steps down.

Jesse said that tells him “[board members] are starting to feel … a change is on the way.”

“The amount of pressure that’s being added to these board members daily ... is amazing,” he said.

USA Gymnastics’ top board members have resigned. Michigan State University President Lou Anna Simon is being pressured to resign. And there are calls for reviews and investigations into how a sports doctor could sexually abuse girls and women for so long, while no one was aware or willing to speak up.

How could these adults and these institutions fail so many children?