Since the 1930s, Sargent Sand Company has held a permit to mine sand from its property that's surrounded by Ludington State Park.

For years, the 400 acre mine was dormant as the company negotiated to sell its land to the Michigan Department of Natural Resources.

That sale fell through.

Last year, the mine cranked back up again, and the neighbors aren’t too happy about it.

Just a couple of miles north of Ludington is a quiet, tree-lined neighborhood between Lake Michigan and Hamlin Lake.

“My husband and I both had a dream of finding a little place and we fell in love with Ludington,” Linda Daul says.

Daul bought her cottage in 2012. She looked forward to spending her summers at the retreat away from her home in metro Detroit. But then, last summer…

“I was greeted with constant, 24-hour noise. Noise from the sand mining operation and the trucks,” Daul says. 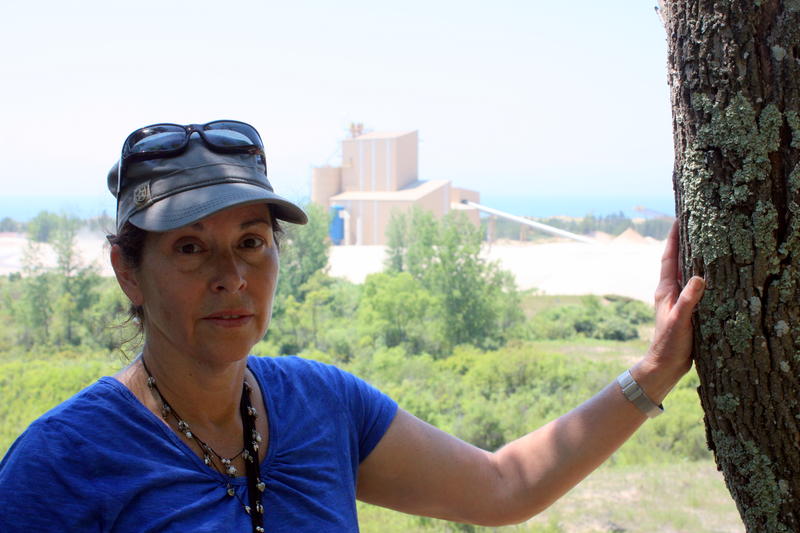 She didn’t know that during the previous fall, Sargent Sand Company was busy ramping things up at the mine.

Daul is leading a group of her neighbors on a hike to see the mine up close.

It’s a short walk through a forest, up a ridge, over the other side, and there it is. The site is a hive of activity. Big dump trucks and bulldozers are hauling sand back and forth. And it is pretty loud.

Daul’s issue with the noise is not the only concern about the mine.

What fracking has to do with sand mines

Ted Auch works for an environmental group called FracTracker in Cleveland. He’s been traveling around the Midwest and getting an up-close look at sand mining operations.

He says that since 2009, the mining of silica sand has become a billion-dollar-a-year industry. That’s because the sand is used in hydraulic fracturing – or fracking. Auch says the fine sands around the Great Lakes are perfect for fracking.

But the resurgence in sand mining comes with environmental concerns.

“These are sensitive ecosystems. Can you reassemble them? The answer is no,” Auch says. “That’s my big concern is - what the hell are they doing here? Do they have anything for reclamation in mind? It doesn’t look like it to me.”

So is the sand being mined in the state park used for fracking?

Unfortunately, we don’t know. Sargent did not respond to requests for an interview for this story.

Fitch says he’s not sure where Sargent Sand Company’s sand is headed.

But he says Michigan sand is not typically used for fracking.

“Most of the dune sand that’s mined in Michigan is used in the foundry industry,” Fitch says.

Fitch says there’s no way an operation like Sargent’s – in a critical dune area – would get a permit today.

But Sargent’s 400 acres surrounded by Ludington State Park is an inholding – that means they own it outright.

“Of course, mining involves removal of the sand so, to that extent, it’s going to change the landscape. There’s no question about that,” Fitch says. “However, they have property rights that we have to honor and so they have rights to conduct their operations there.”

Fitch says the DEQ inspects the Sargent site periodically. The company has to do things like re-establish sand slopes and re-vegetate areas it has already mined.

He says the company has always complied with the law.

If you’re eating right now, you might want to take a little break.

We’re going to take a moment to talk about fecal bacteria.

Researchers at Michigan State University have done some detective work on septic tanks in Michigan, and they’ve found these tanks are leaking bacteria.

Researchers have discovered a widespread infestation of quagga mussels in Crooked Lake near Petoskey. It’s the first time the mussels have been reported in an inland lake in Michigan.

Quagga mussels spread rapidly through the Great Lakes in the 1990s and eventually displaced their cousin, the zebra mussel. Kevin Cronk from the Tip of the Mitt Watershed Council says quagga mussels have a wide range and reproduce very quickly.

<p><em> By <a href="mailto:kramertw@interlochen.org">Tom Kramer</a></em></p> <p>The emerald ash borer will be changing the look of Sleeping Bear Dunes National Lakeshore. The invasive and highly destructive pest was discovered in the park this past June. 90 percent of the park's ash trees are infested. 20 to 30 percent of the trees within the national lakeshore are ash.  Noel Mac Neil is the integrated pest manager for the park.

Last year Sleeping Bear Dunes ranked 13th out of more than 100 national parks, lakeshores, and recreation areas for the number of search and rescue operations conducted there.