With community benefits, new international bridge could be good for Detroit 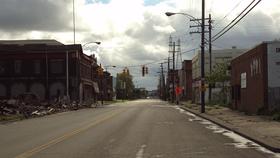 Once it's built, the Gordie Howe International Bridge from Windsor to Detroit will be one of Michigan's most important tools for international trade.

It's projected that truck traffic will double from the current 10,000 to some 20,000 trucks each day rumbling through the southwest Detroit neighborhood of Delray.

So what's good for Michigan trade – not to mention America's and Canada's trade – is going to be felt deeply by the folks living there.

Selina Cerrion has lived in Delray since she was 12 years old. She now owns a home in the neighborhood where she is raising her seven children.

Cerrion says the Delray community is smaller than it once was, but remains as tight-knit as ever.

"It's still our community, and it's like a family," she says.

Cerrion tells us she's in favor of the bridge as long as it "comes with community benefits."

She hopes it will boost the local economy and attract more money and interest to the area.

Simone Sagovac is the project director for the Southwest Detroit Community Benefits Coalition.

"The main areas of community benefits typically are for environmental protections," Sagovac says.

"With this project especially, since the main impacts are coming from the thousands of trucks and the diesel emissions, we're looking for programs to reduce diesel emissions in the trucks."

She's confident such programs are well within the realm of possibility, looking to the ports of Los Angeles and Long Beach, where similar programs have found success.

"There are always differences, but it shows that there are opportunities, and we can be talking about different ways to bring those opportunities to the Detroit area," she says.

Listen to our full conversation above for more from Selina Cerrion and Simone Sagovac.