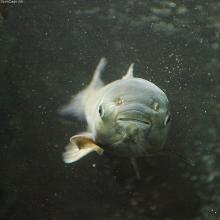 A Canadian court has slammed a trucking company and one of its drivers with a combined $75,000 fine for trying to haul live Asian carp across the U.S.-Canadian border.

Twice in early 2012, Zhang crossed the Ambassador Bridge connecting Detroit and Windsor, Ontario, with a truckload of fish from Arkansas. The fish were packed in ice, and included two species of Asian carp.

Ontario accepts imported Asian carp – but only if the fish are dead. Canadian customs officials called in Kevin Sprague, with the Ontario Ministry of Natural Resources, to take a closer look.

“When you (first) look at them on the truck, they’re not flopping around, jumping out of the truck,” Sprague said. “They’re very cold, so they move a lot slower. You really have to look at them.”

But Sprague said a “substantial number” of the fish, including two species of Asian carp, came right back to life after being dropped in water.

Sprague said he’s not exactly why sure why anyone would want to haul live Asian carp, though he thinks “fresher” fish might fetch a higher price from buyers. There is a market for Asian carp as food; it’s even considered a delicacy by some.

“Or, people may just be a little bit lazy about ensuring that they’re dead,” Sprague added.

Great Lakes states and Canadian provinces have strengthened laws relating to the transport and sale of live Asian carp in recent years, as concerns grow over the carp reaching and spreading throughout the Great Lakes.

A new report says a permanent solution to the Asian carp threat to the Great Lakes could take years to build and cost billions of dollars.

The report was prepared by the U.S. Army Corps of Engineers for Congress.

One of the strategies to keep Asian carp out of the Great Lakes is to eat the ones living in the Mississippi River. But finding a market for millions of pound of carp is not a simple matter. It will take more than a name change. We brought a few chefs together at The Great Lakes Culinary Institute to see what they could do with the fish. Hear about that and why harvesting an invasive species isn’t always a wise management strategy.

Plastic junk in our oceans has concerned scientists for decades. Over the weekend, the New York Times reported on new research that minute plastic beads, the kind used in cosmetics and toothpastes, are ending up in the Great Lakes.