Can you really offset the carbon dioxide you put in the atmosphere?

Every day, you and I burn up all kinds of things.

We burn gasoline to get to work, mow the lawn, or fly to a conference. We burn natural gas, coal, or heating oil to heat our homes. And we burn up coal or natural gas when flipping on that light switch.

Whenever we burn stuff, we release carbon dioxide into the atmosphere.

Burned a gallon of gas driving around town? You just put around 20 pounds of CO2 into the air.

That CO2 traps heat, and all the burning we do is causing the planet to warm dramatically.

(To see an interesting graphic representation of the kind of warming scientists expect, check out this cartoon.)

So what can you do about it?

Of course, there are ways to stop burning stuff. Drive less. Fly less. Buy energy efficient things. And the neighbors won’t like it, but you could let that grass go to seed instead of mowing it.

Right now, our economy revolves around burning fossil fuels. Most of us can’t avoid doing it.

But some companies say there’s a way to help: carbon offsets.

Pay a little money, and a company will invest in projects that reduce the heat-trapping gases in the atmosphere. Think preserving rainforests, or putting up solar panels or wind turbines. 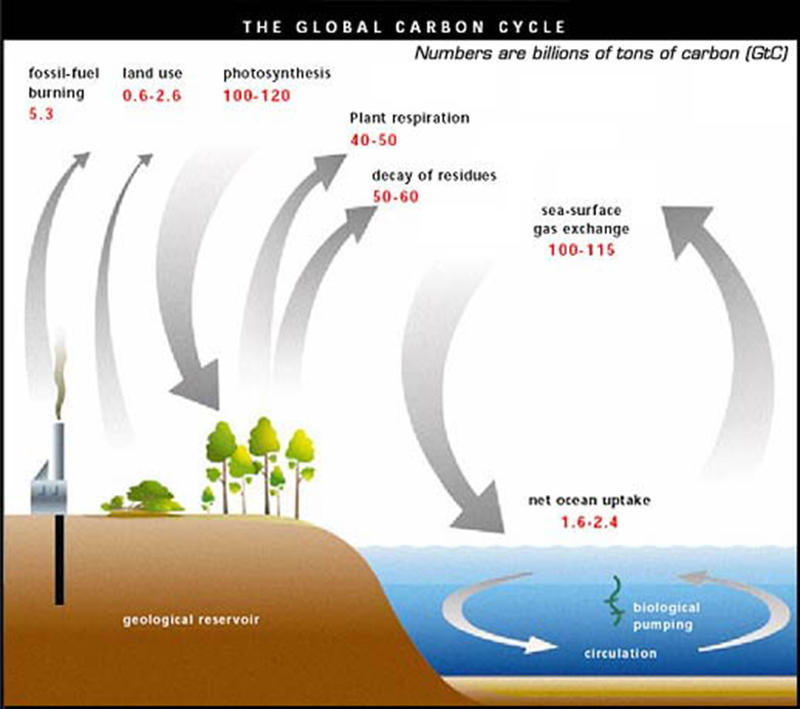 Jeremy Lopatin decided to buy some of these offsets. He and his wife own Arbor Teas. Their business ships tea all over the world.

When they made the choice to offset their carbon, they did online research and found a non-profit offset provider called the Carbon Fund. The group’s message of “reduce what you can, offset what you can’t” really hit home with the couple.

There are hundreds of carbon offset companies like this, such as TerraPass, EnviroFit, NatureBank, ECOTIERRA, and GreenTrees.

You can go to their websites and shop around. You can click a button to offset the carbon emissions from your house, your SUV, your flight. You can even offset an event like a conference or a party.

So do these offsets really work?

Mark Trexler has been watching the carbon offset market for a long time. He helped start one of the first offset projects back in 1988 for the World Resources Institute, and he’s since consulted with businesses, governments, and non-profits on climate change risk and the development of carbon market analysis tools.

He feels the education component of the transaction has been lost. And he says many offset providers, under pressure to make a sale, focus too much on keeping prices low and pitching a good story to potential customers.

They lose their focus, he says, on the true environmental benefit: removing carbon dioxide from the atmosphere.

“We haven't implemented carbon offsets, particularly in voluntary markets, in ways that make an environmental difference, and it's pretty easy to explain why,” says Trexler.

Listen to his explanation below:

Carbon offsets sold by a company called LifeStraw are an example of how this argument plays out.

The company sells offsets based on the carbon saved through a personal water filtration device. People in western Kenya can use the LifeStraw to drink potable water.

You can go buy a carbon offset from LifeStraw here.

They argue they need to sell these carbon offsets so they can give the device away for free. The argument for the carbon offset goes like this:

The project was certified by a well-regarded third-party carbon offset certifier, but it has since has been called into question as a true carbon offset.

Can you tell if you're investing your money in the right projects?

Trexler says to know if you’re investing in a good carbon offset project, you have to know that your money is going to the right place – projects that wouldn’t otherwise exist without your money.

He says there are good carbon offset projects out there, but too many projects aren’t doing anything extra. Some fund projects that might happen anyway – whether money from the carbon offset market comes in or not.

There are third-party certifiers that try to make sure that carbon offsets are what they say they are, but Trexler says the market can’t support a rigorous certification system.

"If they only certify projects that are at the far end of that quality continuum -- if that's all they do -- then everybody's going to go to the other certifiers. So, you know, it's a Catch 22," says Trexler.

All this confusion creates a difficult marketplace for the offset companies trying to do good work in this field.

“If you put out a great website and say, 'we are only selling high quality offsets; come to us – $15 a ton.' Nobody's going to come. Nobody,” says Trexler. “Because they can get that with what they consider the same thing for $5 or $4 on another offset, on another web site.”

A recent report by Ecosystem Marketplace on the voluntary carbon offset market shows that prices for carbon offsets are dropping. The average price to offset a metric ton of carbon today is $3.30.

That can make it hard for people like Tim Whitley. His non-profit start-up sells them for just under $10 a ton.

Five years ago, he started up a carbon offset project called “Carbon Offsets to Alleviate Poverty,” or COTAP. His goal is to use forestry projects in rural, impoverished farming communities.

When he first started, Whitley says he expected to offset five million tons of carbon dioxide a year.

“That was my original thinking. It’s been a real kick in the teeth,” Whitley jokes. “But you know, a lot of start-ups start up that way.”

Whitley says his group sells true offsets – certified by the third-party group known as Plan Vivo.  And even though it’s been tough to get going in a crowded and wild marketplace, he’s hopeful it’ll take off.

"It just it takes a lot longer and costs a lot more than you think. It's a lot trickier than you think. But I can tell you that nothing is ready for prime time, but by virtue of setting out to do something distinct and doing what we said were going to do," he says. "We're doing it."

Whitley knows offsets aren’t the solution – but he says it’s an important tool to use right now.

Whitley says there will always be a strong case for making the carbon offset market work.