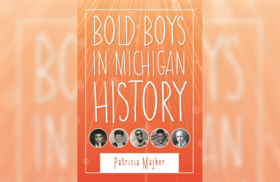 She brought us the stories of Great Girls in Michigan History. Now, writer Patricia Majher is focusing on the boys.

Her new book is Bold Boys in Michigan History.

In it, Majher tells the stories of Michigan boys who did remarkable things before they were 20. These bold young men include a filmmaker, musicians, inventors, athletes, a politician, and more.

Majher’s stories, which are written for a middle school audience, have one common thread: age. While many of the boys in her book would become famous Michigan adults, Majher highlights their remarkable childhoods. The common message threaded through each narrative is that, “You don’t have to be an adult to accomplish something,” Majher said.

Here are a few of the stories featured in Bold Boys of Michigan:

Thomas Alva Edison grew up in Port Huron. Coming from a low-income family, he needed to help his family make money. As such, at the age of 13, Majher said, “He began in the telegram business, and worked on railroads between Port Huron and Detroit."

When the Civil War broke out, people were “starved for information,” Majher explained. Working with someone in the telegraph business, Edison was able to figure out how to transmit information over long distances.

Joe Louis was born in the south and fled north with his family due to intimidation from the KKK. Growing up in the Black Bottom neighborhood in Detroit, Louis’ mother gave him money to play the violin. Instead, Louis took that money to train in boxing. Although he had lied to his mother, the money he made boxing helped his family.

John Gillis, otherwise known as “Jack White,” was born into a large family with nine brothers and sisters in Detroit. “They weren’t well-to-do, but what they did, they did together,” Majher noted. During his early years, White took to playing many musical instruments and grew fond of Bob Dylan. In fact, he has been quoted as saying, “I have three men in my life – my father, God, and Bob Dylan.”