A battle over wetlands and small streams 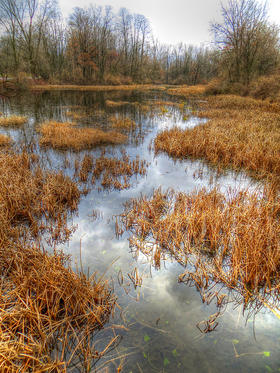 Wetlands have all kinds of benefits for people and wildlife. But wetlands have also gotten in the way of farming and building. So, we’ve drained them over the years.

The federal government has been trying to clarify what kinds of wetlands and small streams fall under the Clean Water Act.

Earlier this year, the Environmental Protection Agency and the Army Corps of Engineers proposed a new rule that they say would clear up confusion.

Annie Snider is a reporter who covers water issues for Greenwire in Washington, D.C. The Clean Water Act was passed in 1972 and Snider says the EPA and Army Corps of Engineers took a broad approach to what fell under it.

"But in 2001, and then again in 2006, there were [Supreme] Court challenges that threw that into question. And after those, the questions of which waters, which streams, which creeks, which wetlands fall under federal power under the Clean Water Act was thrown into question," says Snider.

The 2006 ruling involved two cases out of Michigan. While one contested the rejection of a permit, in the other, the U.S. sued a Midland real estate developer for filling in a wetland property. The developer said the wetland was not a "navigable waterway" and therefore not covered by the CWA. However, until that point, the EPA interpreted "navigable waters" as being "waters of the U.S." and any waters or wetlands connected to one of these waterways. In its ruling, the Supreme Court rejected the Army Corps of Engineers and EPA's limitless authority over water.

After that decision, Snider says that regulators had to make case-by-case decisions about which streams and creeks are important to the downstream waters — the big rivers and lakes that do fall under the Clean Water Act.

"What this [proposed] rule aims to do is set the rules and say if a stream or a wetland meets these three criteria then it gets automatically counted in and if it doesn't, it gets counted out. But where that line gets drawn is a controversial thing, and at this point, the rule would count a lot of things automatically in," she says.

Developers also aren’t too happy about the proposed rule. Gene Szpeinski is the 2015 president of Michigan Realtors.

“To us, that would put just about any mud puddle under the purview of the EPA and the Corps of Engineers.”

He says we should have regulations to protect water in Michigan, but his group sees the new rule as an overreach by the federal government. And he’s worried about having to wait longer to get permits.

On the other side — there’s Todd Ambs, the director of the Healing Our Waters-Great Lakes Coalition. He argues that actually, things will get better under this rule, because right now, developers have to wait while state and federal agencies figure out who’s in charge of wetlands on a case-by-case basis.

“We think this rule, this clarity that it provides will not only provide greater protections for those waterways, but also a more streamlined process for determining how you go about doing any sort of project in and around those waterways,” Ambs says.

Will the new rule save time and money?

"Well, a lot of this remains to be seen. The question is how this rule gets implemented," Snider says.

She adds that the Obama administration says that the rule is categorically sorting waterways the same way they'd be categorized on a case-by-case basis.

"So if that's true, then the regulatory workload shouldn't be much higher."

But Snider adds that one of the reasons the environmentalists want this rule is because they say enough waterways aren't getting counted in under the current approach.

"That could mean that more permits stacked up at offices that need to approve them, and it could also mean more expense and more trouble to be able to do the things that those permits require — often getting a permit that impacts a water or wetland requires that you restore a similar water some place else," she says.

Annie Snider says Congressional Republicans have made it very clear that they do not like this water rule.

"We're going to have to see what priorities the Republicans have at this point. They've made it clear they don't like this rule, but honestly, their number one target has always been the climate regulations. So it remains to be seen where this ranks in their priorities."

She says some are speculating that the Obama Administration could trade the water rule in order to keep the EPA's climate regulations on power plants intact.