Bacon: MSU’s recovery from 3-9 to 9-3 not so surprising with a coach like Dantonio 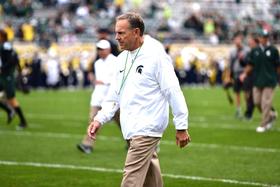 How did MSU go from 3-9 last year to 9-3 with a #9 ranking this year? They may not be particularly great, but “it is a fundamentally sound Michigan State team,” which is all that’s needed to notch nine wins, said Bacon. At the end of the day, MSU has a great coach in Mark Dantonio. “No one forgets how to coach at age 60,” said Bacon. Dantonio is particularly adept at using underrated players to beat elite teams. “You’re taking 2- and 3-star players, and you’re beating 4- and 5-star players.”

On the need for UM fans to remain patient

UM faced a disappointing loss to rival Ohio State this past weekend, with the Wolverines ending the regular season with an 8-4 record, Coach Jim Harbaugh’s worst at the school since arriving before the 2015 season. “Harbaugh has not yet built his machine up the way he needs to,” said Bacon. Fans may have to wait another couple of years for Harbaugh’s recruits to come of age. Bacon advocates patience and perspective. “This program is clearly going in the right direction.”

Listen above for the full conversation.